This work is a long term visual exploration of the area around the River of Antre near Penryn in Cornwall. Walter Bronescombe, Bishop of Exeter, had been rather ill after a visit to Germany. During episodes of delirium he experienced several, ‘visions’, in which he saw St Thomas à Beckett. As the visions played out Becket insisted that Walter would return to health and head to Penryn in search of woods in Glasney. There (in about 1265) he would erect a collegiate church to the glory of God and in the name of St. Thomas the Martyr.

“This shall be to thee a sign. When thou comest to the place, Glasney, thou shalt search a certain spot in it near the River of Antre, called by the inhabitants Polsethow, being Cornish for Mire or Pit– which said place hath of old time borne such a name from fact, that wild animals in the neighbourhood when wounded by an arrow were wont to run thither after the nature and custom of such animals, and to plunge into its depth, and the arrows could never be discovered there. And thou shalt find in it a large willow tree, and therein a swarm of bees; and there thou shalt appoint the High Altar and ordain the fabric. Of which said place it hath anciently been prophesied “In Polsethow shall habitations, or marvellous things be seen.”

The visual style of these photographs,  made whilst walking near my home, hark back to my large format landscape work of the 1970's, and are also influenced by my interest in drawings, and in Abstract Expressionist painting.

These images, made with hand camera used at wide apertures, consciously contradict traditional tropes of landscape photography, as handed down from the f64 Group via the Dusseldorf school, preferencing instead Gustav le Gray's "theory of sacrifices". 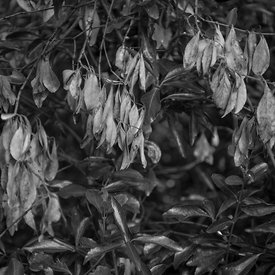 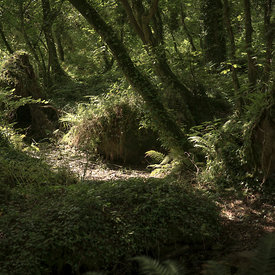